Dearest chess players. Have you ever asked yourself what is the biggest chess database? How do you measure it? Who says who is the biggest, largest? What are the criteria. We will examine couple scenarios and let you decide.

We received couple of "complains" from some chess players they don't have the access to the newest Opening Master chess database and then we realized they are completely elsewhere by other provider who looks like us. On one side, we are flattered, because the moment they start to copy you is the moment you "made it" but reality is we stay humble and rather work harder. When you copy us, try to make at least a different website. The Opening Master is the only one and since 2004. The history is actually longer and dates back to the 90s where international correspondence chess players were collecting games in the DVDs and Excels. One of them was the founder, Alexander Horvath, (1954 - 2013) SIM ICCF, Gold Team Olympiad winner.

So what is the biggest chess database? How do you define it? First of all, we do not mind somebody has bigger, let them have it. We care about the quality and officially recorded human chess games. We split the large chunk into two pieces and still working on it. The OM OTB with more than 9,3 million chess games is intended for over-the-board players, FIDE registered chess games. The size is already large enough to say we got it all. The other smaller is OM CORR with more than 2 million correspondence chess games. The OM GOLEM is basically all together plus our large piece of chess portal games called OM PORTAL. 30 million games should be really enough for your statistics.

The correspondence chess games played on various correspondence chess portals such as ICCF, FICGS, Lechenicher SchachServer (LSS) is a different animal. The games usually go much deeper in the analysis, there are much less human mistakes but you are risking the help is by the machine / engine. So somewhere back in 2011 we decided to split these two ever since kept them separated. However, both databases are created by human chess players. We do not support engine vs. engine games.

What is the intention of a chess database?

1. Collect and present the chess history

2. Analysis and statistics of a position

Collection and history in one chess database

Despite getting our games from different sources, we dedicate a lot of time to eliminate duplicates. We also normalize the names of the players, which amounts to dozens or even hundreds of corrections a month. The free databases are often very low-quality and cluttered with lots of duplicates. There is no such thing as free lunch. We ask for a fair price starting at 39 EUR for one year (OM CORR) and 59 EUR for OM OTB. It is much cheaper than less quality commercial chess databases out there.

Recently we found a great comparison published on chess.com website by one Spanish chess player. 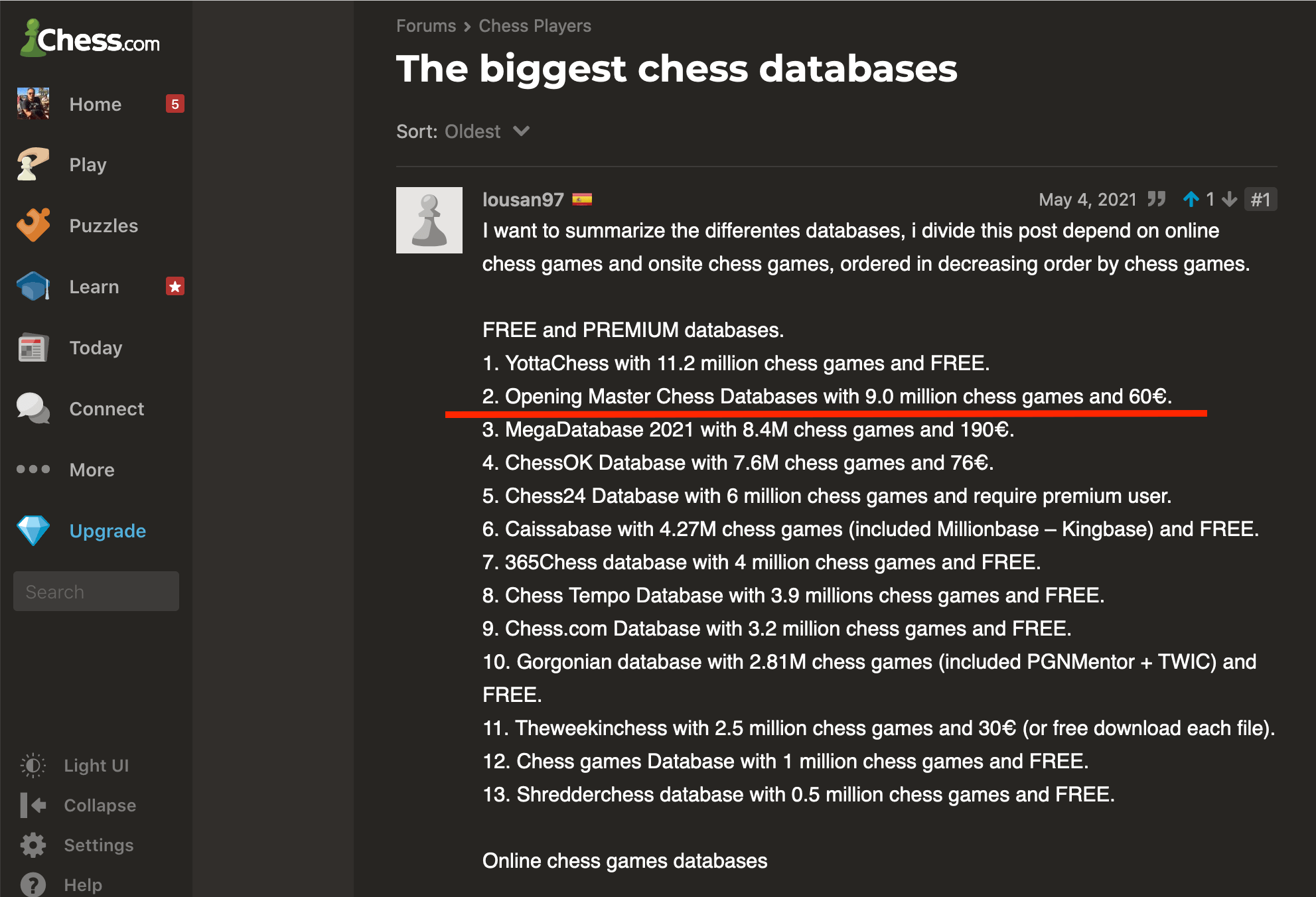 I want to summarize the different databases, i divide this post depend on online chess games and onsite chess games, ordered in decreasing order by chess games.

Analysis and statistics of a position

Perhaps the best explanation of the problem is provided by GM Simon Williams, CEO of GCHESS.

You can visit our tutorials page to learn how to operate with the Opening Master chess databases using the chess database software. In our older article we also cover the dilemma between the computer assisted games and computer games or in simple word is it evolution of chess or cheating.

If you want to learn the openings and there is quite many of them (1327) you better start somewhere. There are classical 52 best openings we offer for free, so 1275 to go. Rumor has it, the best GMs know them by heart. So play and replay each opening on the board using your favorite chess software or GCHESS and learn to use them.

PS you probably heard what is going on in our neighboring country Ukraine. We don't call it "military operation" or "we support peace" like some officials at FIDE, we call it invasion, attack by Russia to sovereign independent country Ukraine. Chess and other sports should not be mixed with politics, but you know what, Russian troops should not cross the borders either. We hope the peace is soon restored from inside. The summary in one status by the most famous Russian player, Garry Kasparov on his Twitter says it all: